I wrote about this in July, and then again in October. But here’s how Michael Jackson’s catalog fared in sales, year to year with 2018, according to numbers from Buzz Angle.

Better still were his streaming numbers. In 2019, the total came approximately to 1.8 billion streams. In 2018, Jackson had 1.2 billion. That’s a rise of 50%. People wanted to stream Michael Jackson songs. And they really did.

Some numbers were down slightly. That was in downloads/CD sales for albums, and downloads for singles. This seems on par for the music biz as a whole now. Fans no longer care to download the music into their phones or iTouch or MP3 players. They’re happier to just turn on Spotify or Apple Music and play the music within their subscriptions.

Buzz Angle also computes number of “spins” for songs on the radio. And that’s interesting because there was a call to boycott Michael’s music at some radio stations. His 2019 spins were up, from 570,000 to 593,000. So the boycott didn’t do any damage.’

A couple of other interesting observations: Michael’s music is spun equally through the entire day and night. And “Thriller” makes the bulk of album sales, followed by “Bad.” But the former outsells the latter 3 to 1.

Just a note: “Billie Jean” sold 47,000 copies over the year, with the biggest numbers between January 1st and the end of March. (That excludes streaming.) “Beat It” and “Don’t Stop til You Get Enough” were runners up.

And so it is. Scandals come and go, but the music is forever. If only Michael had only understood that when he was alive. 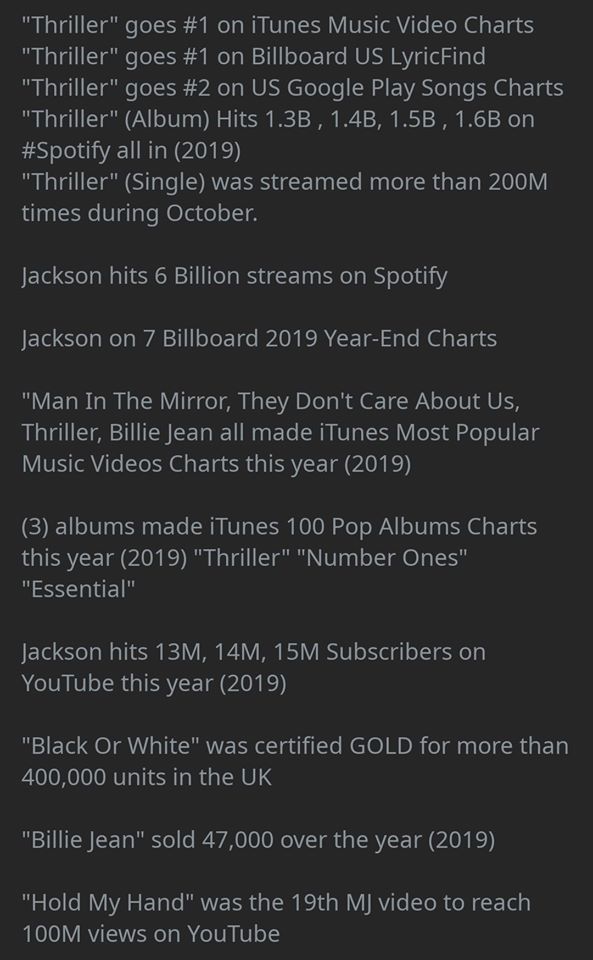